A BU Love Story: Couple Gives Back Through Gift Annuities 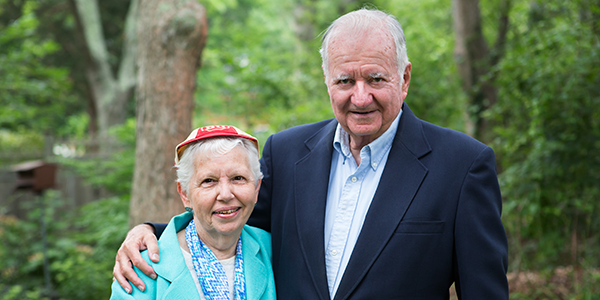 Diana Geigis (CAS '56) recalls her "beanie days" at Boston University with enormous fondness. After all, those days were the beginning of two lifelong loves for Diana: her husband, Ernest (CAS '55), and BU.

The two Boston-area natives met at a mixer two weeks into Diana's freshman year and married a week after her graduation in Marsh Chapel. Six decades later, the retired first-grade teacher still treasures her red-and-white freshman beanie and BU experience.

When their 50th reunions arrived, the Geigises decided to give something back to BU. In 2006 and 2011, they established $10,000 charitable gift annuities to benefit BU's Augustus Howe Buck Scholarship.

"You're grateful for the education you receive," explains Ernest, who never regretted picking BU over Harvard after winning the Buck Scholarship. "Sometimes I actually said to myself - listening to these very distinguished professors - 'Gee whiz, how could Harvard be any better than this?'"

Of course, that's not the primary motivation for giving. "You want to contribute to a college that has meant a lot to you," he says. "But the benefits are significant."

And knowing that the principal will eventually go to the University they love "has a good feeling about it," says Diana.

"There are just such nice memories of our years together at BU," Ernest adds. Diana agrees: "It certainly changed our lives."